Welcome to Takahama,
a natural haven by the Sea.

On the western tip of Fukui Prefecture lies the secluded seaside town of Takahama.

A natural haven surrounded by the Japan Sea to the North and mountain ranges to the South, the little fishing town of Takahama has developed its own unique history and culture,and is the perfect place to unwind and reconnect with yourself through nature.

Enjoy 8km of stunning coastline, with secret bays and a host of activities.
Explore the iconic Mt. Aoba, a popular hiking destination with breath-taking views.
Savor the rich food culture, prized for its fresh seafood and seasonal fruits & vegetables.
Discover ancient Japan, through shrines and temples with over 1300 years of history.
Immerse yourself in the culture, and spend some time with the friendly locals.

4 Areas:Takahama is divided into four areas, and each has its own unique character. 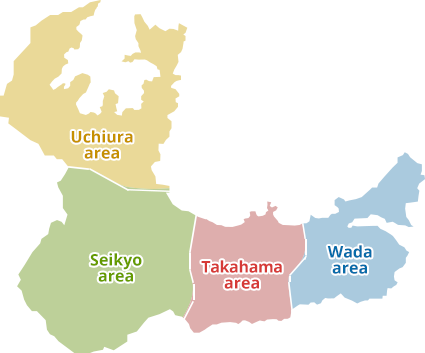 In addition to the Hibiki rice terraces (one of Japan100 finest rice terraces), this peninsula is home to Goshikiyama Park, Hirose Auto Camp, Otomi Cliff, places to fish, and more, with plenty to do in the great outdoors through all four seasons.

Formerly called “Aonogo”, the Seikyo area is home to the revered Mt. Aoba, the symbol of the town that attracts hikers and pilgrims all year round. Known for its fertile soil and many small villages producing seasoning vegetables, its scenic views retain the nostalgia of traditional Japanese life.

Home to beautiful scenic spots like Shiroyama Park & Meikyodo Cave, the Takahama area is the town center and is where you`ll find most supermarkets and many other public facilities, Walking along the old Tango Highway and visiting the port district really evokes the atmosphere of a fisherman`s town.

Takahama has always been known for its great beaches, and in its heyday it attracted as many as 1 million people each summer. As a port town it`s also been known for its thriving fishing industry, and the fresh seafood caught in Wakasa Bay was transported to ancient Kyoto along the famous Saba Kaido routes (Mackerel Highways).

Takahama is also the birthplace of Zen Master Soyen Shaku, a pioneer of modern Japan who became the first Zen Buddhist Master to introduce Zen to the Western world.

Takahama also boasts many traditional festivals that have been preserved and passed down throughout the centuries, including the famous “7 Year Festival” which is one of the largest festivals in the Wakasa region and continues to attract thousands of visitors.

There are 8 different beaches to choose from and a host of activities like SUP (Stand-up-Paddleboards), beach yoga, sea fishing, and BBQand campsites by the beach.

There are also many beautiful landscapes throughout the town, such as Meikyodo Cave of Shiroyama Park and the Hibiki rice terraces along the sea, both voted as one of the 100 best scenic spots in Japan, and many more hidden gems that are off the beaten track.

With loads of sights, outdoor activities, local events and workshops throughout the year, Takahama has something for everyone!

Savor the moment with seafood specialties such as Wakasa-fugu blowfish and crab in the winter, shellfish and abalone in summer and a local favorite Wakasa-guji throughout the year. There are also many local farms producing seasonal fruits and vegetables, as well as workshops where you can learn about herbs and medicinal plants, such as Tochu tea.

If yougot a sweet tooth, there are many local delicacies that are unique to Takahama, including homemade ice-cream, and many traditional Japanese sweet shops and local bakeries for you to try.

Takahama has a host of seasonal events and traditional festivals held throughout the year, from local food fairs and handicraft markets to big events that attract visitors from afar.

In the spring, the town celebrates Hina Matsuri (Girl’s Day Festival), where many residents display exquisite traditional Hina dolls in front of their houses. Summer events draw big crowds, such as Takahama’s spectacular fireworks show on the beach, or the enchanting Isaribiso candle illumination event. Takahama is also home to plenty of sporting events, including local beach rugby and lifesaving competitions held on the town’s beautiful beaches, as well as many traditional festivals such as the “Takahama Seven-year Festival” which is held every 6 years and is the largest summer festival in the Wakasa region.